Horton Heat is one of those true American icons who’s been around for years, yet never really made it mainstream. The reason for this is simple, he’s playing real music.

In a time where most music is calculated and marketed for a specific demographic, the Reverend has stayed true to his roots since he first picked up his six string decades ago. As one of those artists who’s stayed just under the radar, he’s earned his place as a cult icon. A litmus test of cool, you either know the gospel of The Reverend Horton Heat or you don’t, it sucks to be you. Somehow, I scored an interview with the legend and this is what he had to say. 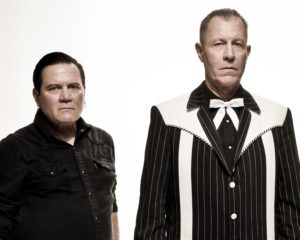 CA: must eat spot in your hometown?

CA: What’s the last band that blew your mind?

CC: What’s the strangest thing you’ve experienced on the road?

HH: Staying in an insane asylum in Russia.

CA: You’ve played thousands of shows, is there one in particular that you think of as your shining moment?

HH: Not really. We opened for Johnny Cash at the Fillmore.

CA:How has your approach to playing and songwriting changed over the years?

HH: Not a whole lot. I just turn my guitar up pretty loud and start caterwauling. Something good eventually comes out. But I’m sure the process starts out sounding terrible.

HH: It can be anything, but most often it’s lyrics or a title. Sometimes it’s just a vocal melody. Sometimes it’s a chord change. But, I’m always aware of new ideas. I just have to remember to write it down or record it.

CA: Living or dead, who would you want to jam with?

CA:Please share a recipe that’s near and dear to you with the readers.

I’m not that great of a cook (my wife is off the charts), but by virtue of being on the road a third of my life, I’ve got pretty good taste. Unfortunately, I have to watch what I eat while I’m traveling. I can’t sing on a full stomach! If I’m in charge of the kids while my wife is away, I do Elvis’ favorite fried peanut butter and banana sandwiches. While the kids watch me cook I do my best Elvis imitation – using the words ‘Memphis’ and ‘Mama’ a bunch.