ED note: As I continue to rebuild the site, I’m going through a lot of the old stuff and repolishing it. Even if you think you’ve read this before, you haven’t.

Years ago one of literally the biggest assholes I’ve ever met gave me some of the best advice anyone has ever given me. These words have served me well and almost make up for the guy threatening to rape me in the walk-in (a whole other story) and it’s a simple concept.

It sounds simple and it is. I just wish that I had put this to better use since I would no doubt be doing much better in life. What it comes down to is that some people play the short game, one or two moves ahead at most and others are able to look much further down the line and see that a few sacrifices here and there can put you in a much stronger position when it matters.

Prime example. I never thought that I’d live long enough to ever have to worry about my credit or rental history. I did a ton of stupid shit with my health and money when I was younger because I really thought I wouldn’t see 30 and have to face the consequences of my actions. Turns out I’m a bit more durable than I thought. Now these things have become a major pain in my ass and have prevented me from enjoying a much better quality of life

That being said, I had a lot of fun being stupid and reckless and I was/am great at it.

You always have to think ahead 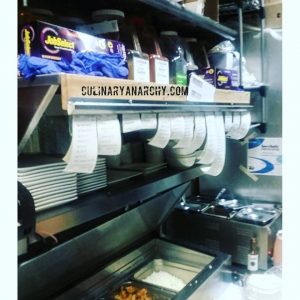 In the Kitchen, you always have to be ready for shit to hit the fan at any given moment and be prepared for a worst-case scenario. When I’m setting up my prep and par list I do the math on the average sales over the past 3 months and always make sure I have 50% more than what I expect to sell. This way even if I do get hit, I’m ready and if not I still have enough product to get me started the next day for those early pops while making sure everything stays fresh. Ask any Chef on earth, the one fucking thing you’re low on will be the biggest seller of the night if you don’t have a backup. Trust me when I tell you it’s way easier to get it done than hope people don’t order it or look like an ass when you run out.

Laundry is another great example.

I work on this on my days away from the Kitchen and I’m lazy. I don’t want to deal with domestic shit. At the same time, I always keep a change of clothes in my bag just in case I need to go out after work and have to bring my A game. Ahhhh, but as soon as I get lazy and I don’t have my shit together, something always comes up at the last second and I have to scramble to get ready which is really way more stressful than just taking care of it when I have time.

The sad fact is that I’m a world class procrastinator

like oh so many of you reading this right now. I have a ton of ideas and things I really need to be working on but motivation is in short supply, much like common sense. What’s worse is that I know that A: I have no one to blame but myself when I don’t get things done and B: Once I start doing things I feel better because of the fact that I’m doing something instead of being a lazy piece of shit.

It’s when it gets to be a regular thing that it gets bad. Balance is key with this like everything else. While on one hand, you have to think ahead and plan for the future, you also need to stay focused on the here and now. That’s more or less the whole goal, to make the most out of each moment and not waste our time and watch our life fade away. It happens faster than you think it will.