Editorial note: I do not advocate violence towards bears nor am I going to start shit with any other wildlife.
By the time most of you are reading this I’ll be in the middle of the back country attempting to summit a peak I’ve had my eye on for a decade now. It’s one of those things I have to do every few years to keep myself centered and humble. No phone, no distraction, just the trail….. 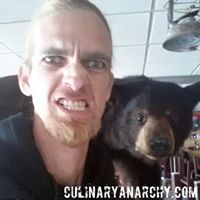 Fuck the bear, I am the apex predator. While I am clearly not the biggest or fastest or smarterst, I am a savage who does not give a fuck. One thing I’m certain of in life is the fact that 99% of the time, crazy trump’s size. The logic is simple. If a bear tries some shit I’ll charge at it and stab the fucker with my chef’s knife.

Yes, I know you’re supposed to play dead and pray. That’s not really my thing.
Yes, I know how big even a small bear is and no, I don’t think I have a chance in hell of surviving, I’m not that stupid. But if I’m going to die, I’m going to die fighting, not begging for my life like a bitch.

It’s part of life. Everyone has some big shit they’re often too scared to face head on. Most people tend to either run or freeze and the best part is that often we don’t even realize what’s happening. If we stay still it will be over fast but if we fight back it’s going to make it worse.

Honestly it’s not the bear who’s in control at that point, it’s that fact that you’ve already been beaten in your own mind. You tell yourself you can’t face it and you live as a victim, always in the shadow, never in the sunlight.

The story of the baby elephant

This is something I remember my psychology teacher telling us in high school and while it might not be historically accurate, it makes the point. Apparently the way that circuses used to train the elephant’s was that, when the elephant was first born, they would tie the biggest chain they could find around its leg. The little baby elephant would kick and struggle and fight as hard as it could to no avail. Finally it would give up, it would just accept its bondage and stop fighting. This is why you would see these massive beautiful animals being held by a flimsy rope they could easily snap, they’ve just given up.

It’s a sad tale yes, but I think you get the point of it. When you have the world telling you things are a certain way, it takes a lot of heart and courage to be willing to stand up and try to change things.

No one gets out alive

While on one hand I’m getting serious about getting my shit together (long story) I’m also very much aware of the fact that that things could go sideways at any second. I’m going to do whatever I can to have as much fun as I can while I still can and I sure as fuck don’t plan on spending it living in fear.

Be smart about it, have a game plan and don’t go rushing into a fight you can’t win. That being said, the next time you encounter your bear, bitch slap that motherfucker and show him who calls the shots. Trust me when I say this, you’ll probably get your ass beat but you’ll keep a bit more self respect and make him think twice prior to knocking on your door.