God only knows what my hands are covered in right now. Yes, I know it’s a 50cc scooter but a bike is a bike and this motherfucker will be running in less than 18 hours. The back tire is off, the oil has been emptied and the air filter and intake have been cleaned. I need a new battery, engine cleaner, a new rear tire and a few hours. With any luck, both the lights and breaks will be “functional” but I’m ready for the worst.

What does this have to do with cooking?

A lot actually. I’ve always leaned more towards the artistic side of things and even with cooking, my approach is rather unconventional. Mechanics has always been something that I was too scared to fuck with since it just seemed too technical and difficult. You can’t really freestyle an engine, you have to be precise so that everything works together in harmony. A lot of you reading this understand this and are far better under the hood of a Cadillac than under the hood of a stove. You’re also scared to make bread because you think you’re going to screw it up.

The point is that if my stupid ass can get this Chinese knock-off piece of shit up and running, you motherfuckers have no excuse to not cook real food for yourself. Most of you know more about the kind of oil you put into your engine than you do the food that you put into your body. You buy the top of the line stuff to keep your engine running at it’s best yet you eat processed shit and wonder why you’re tired all the time.

It’s going to make me a better Chef

I’ve been so focused that I’ve lost my edge. By using a completely different part of my brain and doing something that has nothing to do with food or cooking, I’m giving myself a much-needed rest and a chance to recharge the mojo. Right now I’m far more a hired gun merch than I am a Chef. It’s a no-brainer turn n burn gig that I could do in a blackout. Right now the last thing that I can do is run a Kitchen and create anything of value…..right now.

I can’t afford a therapist. 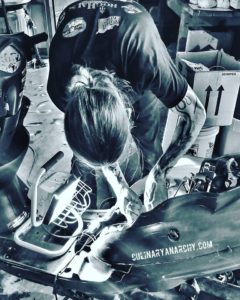 I wish I was joking but I’m not. Fucking insurance bs, whatever. The point is that I haven’t exactly been myself for a bit and I need to take some time to process and work out some serious shit. Three years ago when I lost my Old Man I was in the same state of mind and looking into the abyss. Getting on a bike was the only thing that gave me any sense of peace and was the only time I didn’t want to put my fist through a wall while crying in grief. Loss and heartbreak will fuck with the best of us and I’ve gone through more than my fair share of shit the past few months.

Point blank, getting this bike up and running and getting on the road is the only light I have right now. It’s the only thing that makes any sense or gives me any sense of hope. I’d rather ride than fuck right now and I haven’t gotten laid in a few weeks so that should tell you something.

Update: Everything that could go wrong did. Thanks to the holiday I had to call 15 places to find a shop that was both open and had the tire I needed. When I got to the shop it was sketchy as hell and they didn’t take cards or have change…. The tire itself was also a total nightmare to get on and I still don’t have a battery.

There was at least a half dozen times I was ready to kick the shit out of the damn thing and called it a loss. Despite the heat and frustration and setbacks, I was able to get her running and will be riding in the morning. The thrill of the engine not only starting but staying on and sounding good made the bullshit worth it.

Listen, if you want something bad enough you figure it the fuck out. You don’t let the bullshit stop you, you find a way to get shit done. That’s what Punk is, it’s not about music or mohawks or studded leather jackets, it’s about overcoming the odds and proving the doubters and the haters wrong and making things happen.