I just put up Johnny Cash’s mugshot in the studio, the same one I’ve put in every Kitchen I’ve run for the past 12 years. It’s him sitting there waiting to go to lock-up, holding his ground without fear or remorse. Granted, he was probably high as fuck but that’s not the point.

So why do I keep his mugshot on the wall? 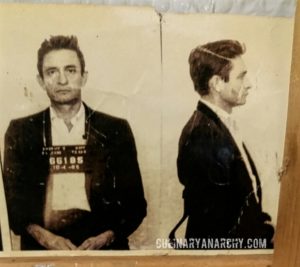 It’s not the fact that he was cool, it’s that he overcame the struggle. Despite all the shit that the man went through, he kept his resolve and came out on top. He stood his ground despite the odds and while the man had a lot of faults, he was able to make peace with them in the end.

Had things been easy for him, without the dark parts of his history, would he still be Johnny Cash? Sure he might have still written songs and played the guitar but even if he was singing the same lyrics, it would have been faked. He was able to sing about love and loss because he had experienced them and the truth came out in his voice.

You know he’s thinking about someone he’s not quite over when he’s playing. You know he’s singing directly to her, hoping she’ll hear his voice on the radio and come home.

You don’t know what you’re made of until you look over the edge and come face to face with your own demons. People talk tough but how do they handle it when life throws a sucker punch? I’ve watched big men fold and been inspired by the strength of those some would consider meek. The point is, until you’ve been hungry, you don’t really know who you are.

This is why we respect the man, this is why we admire him. It’s not about being successful or acting cool. He wasn’t acting, he was the real deal, he was cool. He inspired us to overcome and push forward and to stop making excuses.

I just had the ever loving living shit kicked out of me by life and it happens. I can’t change the situation, I can’t change the fact that even this morning I woke up to having nightmares about the girl. But I look at that photo and I ask myself “What the fuck would Johnny do?” and I light a smoke and kick start the bike.