Really? I’m trolling my own page by publishing a fact? No….no, no, no. Even my proud to be called Redneck friends out here in bumfuck Arkansas know what’s up. They’re not that stupid and the head of my cock isn’t as sensitive as you motherfuckers. I hope you don’t think that you’re getting an apology because that’s the furthest thing from my mind right now.

Fun fact, I was at Church yesterday, a Southern Baptist Church in fact, watching one of my best friends and his wife get baptized. Much to my surprise, I didn’t catch fire or get struck by lightning, the ground didn’t open and swallow me. Does this mean I’m a Christian? Fuck no.

I honestly didn’t think that the original post would piss off so many people and so I say this to both sides “Get the fuck over yourselves!”. I was simply trying to explain to my buddies 14-year-old son that this white bread version of Jesus was bullshit and that the dude was in fact, a lot cooler than we give him credit for. He sure as hell was not some blond haired blue eyed Aryan poster boy that oh so many morons want to think he was. He was born in the Middle East for fucks sake, how the fuck could he have possibly been white? Please, will someone explain the logic of this to me? 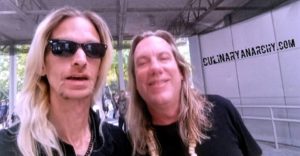 It wasn’t meant to draw controversy, I was trying to get the kid to practice critical thinking so he wouldn’t grow up to be a fucking idiot. I was pushing him to question things and not follow blindly like so many others do, too afraid to disrupt the status quo.

Oh, but it’s clear I hit a nerve with a lot of people.

First off, I’ve never been one to keep my mouth shut or my opinions to myself and while this might be mainly a food site, I run the motherfucker, I call the shots and I publish what I want without fear. I don’t make a dime so why the fuck should I censor myself? I write about sex and music and drugs and whatever else I feel inspired to write and when idiots comment, I respond accordingly. When someone else starts paying my bill then I might….no….I still won’t give a fuck.

Those of you who responded that Jesus wasn’t real, I get it, you’re angry at the church, I understand. I’ll fully agree that a lot of fucked up things have been done in the dude’s name. All the dogmatic bullshit aside, I kind of dig the guy, hell, I admire him. The guy lived a life of love and compassion and even if it’s all a myth, I find it inspiring. Maybe he was nuts, maybe he wasn’t a divine being or the son of God, I really don’t care. What I care about is the man’s actions in the face of adversity, his unwavering love. For all I know, the guy might have been mentally ill but damn if his message wasn’t needed.

Please note that, chances are I know more about this than you do. I’m a nerd, I spent a lot of time studying various faiths, I’ve been kicked out of two Buddhist temples and pissed off a lot of people for simply asking questions that, it turns out, they don’t have answers to.

Faith should be what pulls us together, not what drives us apart. None of you, not a single fucking one of you really knows the “truth” and I sure as hell don’t either. Instead of practicing love, compassion and forgiveness, the foundation of just about every religion, you motherfuckers want to get pissy about what God wants to be called and whether or not he had two arms or eight.

To those of you who got offended, seriously, check yourself. Do you really think that Jesus would give a fuck?!?! Do you really, in your heart, feel like it makes that big of a difference? He wouldn’t care, it’s not him that has the problem, it’s your own fear that’s causing the anger because I said something that disrupted your misguided notions about a dude who died two thousand years ago.

Smoke a joint and get over yourselves.