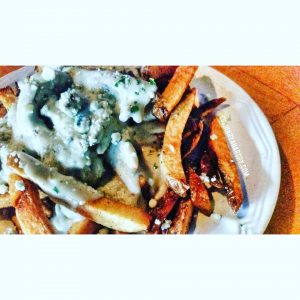 This is one of those things that happens when you spend a lot of time smoking grass trying to come up with something different for your bar customers. Plus we had taken blue cheese crumbles off the menu and had a five-pound bag that I didn’t want to go to waste.

Now, when I first posted the photo, some smart ass made a very ignorant comment about heating milk, add cheese and serve. While it’s simple, it’s not that simple and if you don’t pay attention, it can scald easily. Also, that recipe sounds bland as fuck..

First, I mince an onion and cook it in bacon fat till soft. Then I let it cool before I add the Cream and slowly raise the temp and whisk in the cheese. If needed I add a roux, made with bacon grease because why not. Then add some black pepper for a little kick in the back of the throat. Taste and adjust.

As a side note, the other thing that really pissed me off about the comment was the lack of love that he had in his overall attitude. Yes, this is basic bar food but it’s still food and if you’re going to cook, you treat everything with respect. If not, I don’t give a shit where you graduated from, you didn’t learn. That being said, at least you’re own instead of buying the premade bullshit.