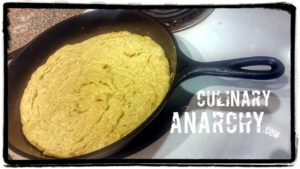 It’s dawned on me that a lot of you have never eaten real cornbread. Yeah, whatever, you ate those things at that new “Southern” place but that was made with a mix and not cooked in Cast Iron. That shit ain’t Cornbread….

Real Cornbread is made from scratch and baked in Cast Iron. It’s also not hard to make from scratch since it’s more or less a quick bread recipe, just like cookies or pancakes. You use Baking POWDER and Baking SODA with a little salt to get things to rise.

This is not a healthy recipe. While most people will tell you to use butter or oil, I use Bacon grease. This sounds a bit overboard but it adds a lot of flavor and keeps the bread moist, plus you’re only using a half a cup of it.

The reason for the sugar? Simple, most of the time Cornbread is served with spicy food such as Smoked Pork or other southern favorites. The sweetness helps balance it out a bit similar to Coleslaw.

Help fund the second part of the Documentary