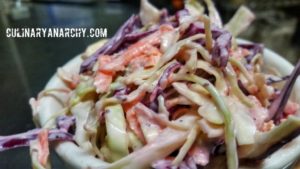 In the south, everyone has their own way of making Coleslaw. Personally, I’m not a fan yet it makes sense why people enjoy it over a spicy pulled pork sandwich on a summer afternoon. There’s a balance in the contrast between hot and cold.

This is an oversimplified recipe, just to get you started. Some people put carrots in, some people swear by using white vinegar while others only use cider vinegar. I like to fine shred mine, others like wide ribbons of cabbage. That’s the beauty of it, the biggest thing is the general ratio of …

2:1 Mayo/Vinegar: 1 lb shredded cabbage. In other words, if you want to make a pound of slaw, you mix two-thirds of a cup of Mayo with a third of a cup of Vinegar and then mix it with the cabbage.

Granted, you can add sugar or even mustard, a lot of people swear by this but it’s your slaw so make it however you want to.

Dig the site? Support us on Patreon