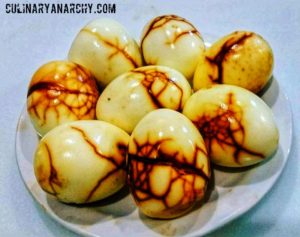 I think I saw a photo of these and since I’ve been playing with a smoker and had eggs, I said “Why the hell not?” and made a batch that turned out so well that I put them on my menu. Since eggs don’t have a ton of flavor it doesn’t take much time in the smoker for them.

There are a few ways to do this but what I’ve found to be the easiest is as follows. I boil them for about 6-7 minutes which is a little over a “soft boil” and then cool them, roll them to slightly crack them(this is how they “marble”) and then put em in the smoker for 15-20 minutes depending on how thick the smoke is.