On one level, I feel like a lazy shit and on the other hand, my girl is worried about my health, both mental and physical.

In my mind, this site should have been rebuilt by now, I should be working harder. Same goes for the Documentary, I should have a rough cut finished by now and should be in negotiations with Netflix.

Then I look in the mirror and I see that my girl has a point, my eyes and cheeks are sunk in and, while I’ve never been a big guy, I’m not looking good right now. 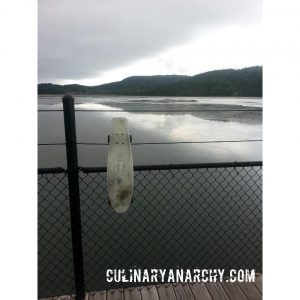 I’m not drinking anymore so I’ve got that going for me but my addiction is most certainly in full swing. She’s right, I don’t have any hobbies and even when I pick up my guitar or my sketch pad, it’s to work on something for this, it’s not just to simply play the guitar. I don’t hang out with my friends because I’m too busy, I tell myself that pointless chatter is a distraction that I don’t need that I need to be editing recipes and film clips.

From the time the light starts to come in the window and my mind starts to reboot, it’s an obsession.  By the time she gets home from work and school, I’m so fried that I can’t look at a screen. It’s like this every day and she’s starting to get a bit sick of it.

“She doesn’t get it, she doesn’t understand” is what I hear in the back of my head. “This is what it takes to get ahead!!!” it screams. But at what cost?

I know burnout all too well. Last night was a bit of a wake-up call. I should know better after all these years that, after a certain point, creatively I’m done. Anything I do after that line is shitty and feels tired and is in fact, counterproductive. I need to face the fact that yes, I have limits and that even at my most driven, I can only produce a set amount of quality work.

The addiction keeps telling me it’s not enough.

Yes, my head is host to a variety of fun disorders and yes, I should seek some kind of treatment since self-medication clearly isn’t working. As of a week ago, I’m weighing 130 pounds and despite knowing this, the addiction is telling me “It’s no big deal, once you get published, once you get a deal for the documentary, then you can rest.” and ha ha, I know that’s bullshit since once that happens, I’d be working even harder, if there’s a me left and I haven’t shriveled up into nothing.

As much as it sucked to have to listen to her last night, I can’t argue with her points or her concern for my well being. The good news is that, for the most part, this is nothing new for me and right now, I’m still in a state that I can do something about it before running into a wall like I normally do.

A lot of you running Kitchens are reading this and shaking your heads. You can relate to everything I’m saying and some of you have had the same talk with your partner. A few of you have even lost a few relationships because “Civilians don’t get the lifestyle.” I’ve said the same thing and I’m telling you, it’s a bullshit excuse for the fact that we become total assholes in this state.

Fun fact, most restaurant owners don’t give a shit. They’ll blow smoke up your ass and push and push and push. But the minute you hit a wall and can’t do it anymore, they’ll toss your ass out and find some other jackass on Poached or Craigslist.

We gotta start playing the long game folks, we gotta start taking better care of ourselves. I gotta fix this on my own end before I start preaching to you unless I want to be labeled a hypocrite. I’ve got to lead by example.

If we want to last, we need to start investing in ourselves like we do with our Crew and Kitchen. If not, I might as well start drafting my will because at the rate I’m going, I won’t see 40 and this isn’t a joke. I’m so used to treating myself like shit in the restaurant business that even working from home, I still put myself dead last.

Ahhh, but all of this is still very fixable and over the next few weeks, we’re going to try some new things. Stick around, it’s going to be fun.