It’s not a joke, I’m being dead fucking serious. The simple fact is that 95% of the population really doesn’t have a clue how their food is produced. You go to the store and it’s already butchered and ready to go. It’s not a life to you, it’s a product in a case that you purchase with less thought than most of you put into the kind of toothpaste you use. There is a major disconnect.

This is a problem.

Yes, I know it’s not practical on a day-to-day scale and I sure as hell am not going to slaughter a cow every time I’m craving a cheeseburger. For fuck’s sake, I live in downtown Seattle, it’s just not going to happen. But I am willing to take a life to feed myself if need be. Most people either won’t or simply don’t have the balls to. Ironically, a lot of these people are the same folks that want to talk shit and point the finger at vegans.

I’m also not saying to do away with modern farming but let’s face it, we have a lot we need to address in regards to how we raise and slaughter our animals. While we may raise them as food, they’re still living beings and should be shown respect and compassion and not needlessly wasted. We can do a lot better by these animals and a lot of farmers are taking steps in the right direction.

If you go live on a farm for a few weeks and have to wake up at 5 am every morning to go fight with a 1,500-pound cow to milk the bitch while dealing with flies, shit and piss, you never look at butter the same way again. Oh, I still use the hell out of butter, it’s just that now I have a bit more reverence for it. It’s not just a product I order that comes on a truck. It’s life and it’s not something that I’m able to take for granted anymore.

Yes, I hated every minute of it but it humbled me and made me a much better person and a slightly better Chef.

While I’m not a die-hard fan of French Cuisine, I do love the whole concept of nose-to-tail cooking, of not wasting anything. You turn bones into stock and trimmings into sausage, pickling and smoking what you can’t use right away and honoring the animal. You find a way to use everything and make it delicious. Two hundred years ago this wasn’t hip or trendy, you did this or you died from starvation. 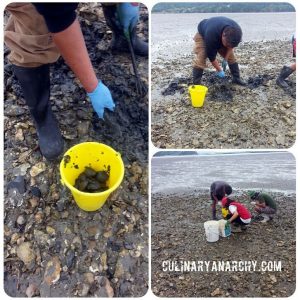 Even a simple meal is the end result of far more factors than you realize. Steamed Clams is the result of the clams feeding and growing to size, the wheat and garlic coming into harvest. The grapes and yeast being turned into wine and of course the butter. You never really think about this, you’re too busy taking photos for Instagram. The truth is that most Chefs don’t really get it either. They know but it’s still an abstract concept. Once you do understand it, it kind of fucks with your head a bit.

Don’t get me started on the vegan thing.

While I respect people’s choice to eat what they want, in my opinion, life is life, plant or animal or otherwise. Just because you can’t look in a carrot’s eyes when you rip it out of the ground doesn’t mean that you’re not taking its life. Everything we eat is something that was living that has given its life to give us life.

The problem is that 99% of you reading this are so disconnected from things that you really don’t get this. You know that apples grow on trees but you’ve never worked in an orchard and tended to them every day, watching the buds form and the fruit grow day by day. You don’t have to deal with evil little goats to get that tasty cheese we all love. You didn’t have to fight the tuna out of the water and gut it for your lunch at the local Sushi bar.

Listen, I’m grateful for the fact that we’ve evolved to the point that we have the resources to feed the masses without us having to work the fields every day but it doesn’t change the fact that life is still sacred and our food shouldn’t be taken lightly. I’m all about using technology to increase output and quality as long as respect is shown to the source.

This is a big part of the reason that I try to work with small local purveyors. These people aren’t running massive operations and treating things like numbers, they tend to put their heart into whatever they are growing and raising and they do it ethically, not for good PR but because they truly care about what they are doing. Their priority is quality over quantity and they know they will never become millionaires but they still get up every day and take pride in their work.

I know that most of you are not going to go slaughter a Chicken as a result of reading this. What I am asking is that you have a little more respect for the food that you eat and the fact that life was sacrificed.

If you dig what I do, please help support me via Patreon, buy a book or check out some of the merch.