King Marco this, the Godfather that, the Devil in the Kitchen…. But Knorr Chicken stock was his secret ingredient the whole time? Are you serious?

I really don’t know what’s worse, the idea that he was using that shit at Harvey’s or that he’s lying now but either way he’s a sellout.Yes, this is old news but kids still idolize the guy for some reason.

Before I go on, let me explain how I define a sellout. A sellout is a person, an artist, a public figure that makes a career by taking a stance on certain points. Then, someone offers them a lot of money and they change their stance or, even worse, you come to find out that they never believed or practiced what they were preaching to begin with.

Here’s the thing. You grow up idolizing, let’s say a Baseball player or an Actor or whatever kids are into. This person portrays themselves as wholesome, drug-free, church-going, faithful to his wife who was his high school sweetheart (who he waited until marriage to bang) and that whole apple pie bullshit. You have his poster on your wall and he’s the reason you study and get good grades and volunteer at the senior center on the weekends when you don’t have choir practice. One day you’re going to meet this guy and shake his hand and say “Thank you, I hope I made you proud Sir.”

Then one day you do. But he’s coked out of his skull with a couple of hookers and tells you to get fucked while he starts pissing on the flag.

“But who are you to judge him? He could hand you your ass in the Kitchen! He’s way more successful than you’ll ever be!!” will be the top three comments on this. Trust me, I’ve already heard it and here’s my response.

First off, I was a die-hard fan of his. I bought his books and studied them like the gospel. I had the photo, yeah, the same one you see on t-shirts, on the wall of my Kitchen to remind not only my crew, but myself what a real Chef was all about. He made me want to read more, cook more, push myself and my Kitchen and never cut corners or, use powdered fucking chicken stock.

Second point: Who knows? For one thing, I’ve never been into the idea of competition when it comes to cooking or anything else. I know that I’ve got enough talent to not embarrass myself if I had to go toe to toe with the guy but really, it doesn’t interest or appeal to me at all.

And lastly, yes, he is. Big surprise there. Do you really think it matters? Seriously, I’ve had a fucking awesome life and have done a lot more than most people. While I might not be as “Famous” as he is, I do pride myself on the fact that I’ve made an impact on the industry and inspired others with my work both here and in the Kitchen. I don’t know what kind of waves I’ve caused but I can die smiling knowing I did a lot more than nothing with my life.

With this whole Knorr bullshit, it’s hard to tell what’s fact from what’s fiction. If what the ad says is true and he really was using that shit while earning his stars, what else is he lying about? Are the Michelin reviewers really that stupid? Was any of it ever really true or was it all an act, the work of a publicist who knew how to sell an image to the masses? 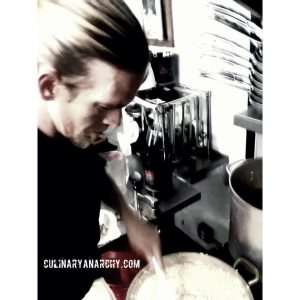 I’ll say this, he helped make me a better Chef because I bought into the bullshit. He inspired me to push myself and not cut corners. He made me to look at food and cooking in a whole new way and to never settle for anything other than excellence in the Kitchen. It just sucks to know it was all a lie.

Listen, the dudes got bills, I get why he did it. At this point, why the fuck should he care what someone like me thinks, I’m nothing to him. Chances are they offered him more cash than I’ve made in the past 20 years to come smile for the camera. At the end of the day, it’s his life and his choice and if he’s cool with it, more power to him.

Oh, and for those of you who say I’d do the same thing if Sysco offered me enough money, you’re sadly mistaken. For one thing, I’m used to being broke so it’s not like I’ve had money and am now poor again, I’ve always been poor. The other thing is that I have this thing, I think it’s called integrity. Anyways, it makes it real difficult for me to do things like that. I like being able to respect what I see in the mirror and there have already been enough times in my life I wasn’t able to. But hey, that’s just me.