I take a lot of pride in what I do, both with this site and in the Kitchen. I’ve worked hard, day in and day out to be able to do what I love and I’ve also been lucky enough to live in some really cool places. But the awards, the stars, that ego driven bullshit that drives some Chefs to suicide, it doesn’t interest me in the least.

This is Art to me. I’m going to cook no matter what. Honestly, it’s the only time things make any sense and I’m at peace and don’t feel like a total fuck up. The Kitchen is my temple, my refuge.

A few years ago I was in Cali. I had done my stage and was going to be taking over as the new Executive Chef at a small yet very nice little bistro. The Chef’s last day was also the day that we had a food show to attend. Typically I love these things, it’s an excuse to get wasted and talk shit to other people in the industry and they’re more or less dick contests for charity. At this one I was going to try and behave for a change since the torch was being passed.

The Chef burnt the shit out the appetizer that she had planned on taking to the event. Not the end of the world, it’s not a catering job, we’re giving the food away. Either take it off the menu or make it again. We didn’t have time to make it again but what we did have was a sample box of fried crab balls that the shitco food rep had left us. She was going to fry these and serve them at an industry event. I was asked to make a roasted red pepper aioli and so I sucked it up and took care of it.

So much for good behavior.

The waitress I caught a ride with had a blunt already rolled when I got in the car and it was made clear that the rest of the day was going to be like this. I smoke a lot of weed but I had been in Kentucky for almost a year. This was a big blunt of Cali Hydro so when I got the event I looked like I was going to a Snoop Dog (Lion?) show, in a Chef’s jacket. Oh, and I had Blue hair at the time just so you have a better visual. 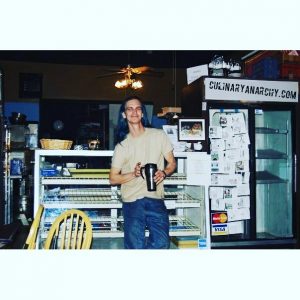 Even the owners encouraged me to lighten up and have several glasses of Sangria as they introduced me to the who’s who of the local restaurant scene. I did my best to shake hands and say as little as possible to prevent me from making enemies in town before I even unpacked my knives.

A Sangria drunk is a special kind of drunk, more or less the polar opposite of a whiskey drunk. The world can be collapsing and you won’t give a fuck about anything other than not spilling your drink. I was very drunk when the announcement came on the loudspeaker.

I almost dropped my glass.

They grabbed my arm and insisted that I go up and take the award with the Chef. I was mortified, ashamed and embarrassed.

“But maybe they really dug the Roasted Red pepper aioli you made?” you might be asking. I didn’t want anything I made to go anywhere near those fucking things but the ink hadn’t dried on the contract and I was trying, for a change to choose my battles with a bit of sense and not let my pride get in the way. Never in a million fucking years did I think we would win an award for the shit.

I looked down from the podium at a room full of idiots and posers who claimed to be foodies yet couldn’t tell the difference between fresh and frozen. These were the press, the shot callers, the people who’s ass you have to kiss to get a book deal. These idiots were supposed to know more about food than I do as a Chef.

These motherfuckers were judging me?

One the other hand you have Yelp. The company itself is shady as fuck and I wish these guys would go on the record and answer some questions but as of yet, no luck. The reviewers themselves…can best be described as “Small children”. They either get really really excited about something or offended at the slightest infraction and what do they do!?!? They post a review…Seriously, read through most of the shit on Yelp and tell me that it doesn’t sound like it was written by a 7 year old.

This is what happens when you bring ego into the game. Everything gets fucked up.

A Chef cooking to impress isn’t cooking from his heart. They’re going to be too focused on perfection and the final product. Same goes for the food critic. Right off the bat they’re trained to judge every little detail of the place. You can’t enjoy a good meal if you’re spending the whole time thinking about it.

A good meal, no matter how simple or complex, comes down to an experience that’s felt by both the Chef and the customer.

But how do I know if I’m hitting my mark?

Ah, but when it comes to other Chefs that I respect both personally and professionally, this is when I pay attention. They get it, they know what it takes to be truly great instead of just good or proficient. These are the people I listen to.

Let’s get real graphic for a second.

When you’re having sex, if you start to really think about what you’re doing and worrying about what the other person is thinking etc, etc, you lose all connection and it’s never going to be good and damn sure won’t be great. Yet, when you let go of all that and you just embrace the moment, this is when the magic happens. 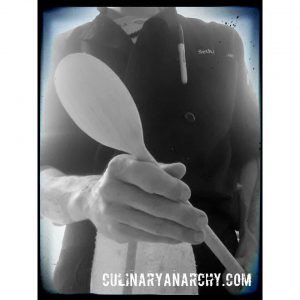 I don’t need my name on a plaque to know my food’s on point and I don’t need to ask a woman if she came.

I know she did.