Often times what you need and what you want are two different things. Sometimes you have to let go and surrender and let the universe show you what you need to see and when you do, it will change you forever.

It’s not as fun as it sounds…

Ayahuasca is some heavy duty Medicine that most of you folks will never get to try and well, it sucks for you. Before coming face to face with it, it was something that I had only heard about in passing, the South American version of Mushrooms or Peyote, another gateway to the other side. I knew next to nothing about it and it was something that I wasn’t actively seeking.

In dealing with this type of thing, you have to remain open-minded. Very open minded. Science understands the chemical makeup and the reaction that these substances have on the brain. They can more or less explain away the entire experience as a chemical reaction altering your senses. I did my homework since I like to have a basic understanding of what’s going into my body and what it will do to me. 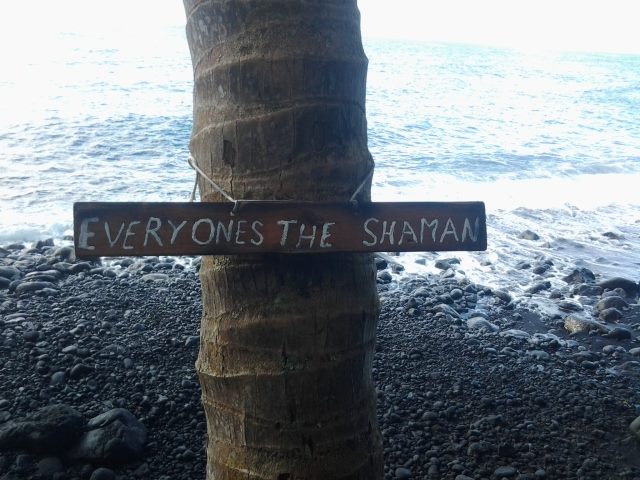 At the same time, I think that most organized religions are completely full of shit. I understand that people need a sense of belonging and ritual etc but it goes without saying that religion itself is as flawed as the men who created it. I have no desire for this in my life. If I want to connect to the divine why waste my time with the middleman, why not just go straight to the source. This kind of sums up my faith.

Ask just about anyone who’s ever done mushrooms (for the sake of this point we are leaving out LSD) and chances are that they will tell you it was an amazing experience and deeply profound. I’ve had a lot of experiences with them and it was always enlightening and why, when they find me, I don’t say no.

These substances are not the end all be all, they are tools, just like meditation, prayer and service work. You can’t use a screwdriver to cut down a tree anymore then you can use a chainsaw to fix your sink (if you prove me wrong please post video). Ayahuasca is most certainly a chainsaw. It’s great if you know what you’re doing and understand how badly it can fuck you up. If used properly it can do more in one night than a year with a therapist.

I was living in Hawaii working as a private Chef at a Yoga resort when I met a guy who had the same attitude as I did towards various substances and we talked shop for a while. It was a philosophical game of sniff ass to see if the other was full of shit. He had been given the knowledge to make the brew and he wanted to share it with the right people who needed it. He never asked me for anything in return other than not mention specifics in this article take whatever I learned and make the world a better place. He didn’t come right out and say “Hey, you want to come trip your balls off in the Jungle?”

No, it was much more gradual.

I had come to Hawaii with an open heart and mind hoping to cleanse and evolve. I didn’t have many if any, expectations for the Island. I was hoping to do some Yoga and Skate in my off time and that was about it.

When the conversation came up it was more of him asking me if I thought I was ready. This was not something I randomly jumped into and my answer was “Yes” but it wasn’t sudden or impulsive. And yes, I was scared, this was going to be some serious shit.

When the time came we gathered in a place that, ordinary any other time, became sacred for the night. Now some people need set rituals and rites and that’s fine and good, for them. We paid our own respects and said thanks in our own way and the intention was there. Our paths had brought us here together for some reason and we are honored the that this was sacred.

The best way I can describe it is like burnt molasses. And it’s not just one plant, it’s two. A vine and a shrub that work together to take you to the other side. I can see some naked native eating a mushroom and tripping, but how in the fuck did they figure out how to make this stuff without the helping of a greater consciousness.

The cliff notes are like so: There’s a chemical called DMT which some of you might have tried, but you didn’t get the full effect. Thanks to evolution, our bodies have natural blockers to stop you from processing it. With Ayahuasca, it’s a one-two punch since one of the chemicals destroys the blockers allowing you to feel the full impact of the DMT.

The point is that you pound down the vine and boil it with a ton of the leaves for sometimes several days. As it’s cooking you can smell it in the jungle for miles. Its similar to making a real stock from scratch and my culinary background made it easy to understand what we were doing. Oddly enough it also made it more confusing.

The first time I fought it.

It was a mistake. I was too scared and kept myself grounded, preventing myself from the full experience. I took a lot, more than normal for a persons first time yet I was able to hold it together. The rest in my group, not so much. They got swept away in the undertow. One of the girls tripped harder than I had ever witnessed anyone trip before in my life. But it was good for her. It opened her mind and I still talk to her. She views it as a very positive enlightening experience. The rest of the group had their own encounters and saw what they needed to see. But that’s for them to speak of.

I left the Island not long after. I felt incomplete like I had cheated myself somehow. I spend 6 months back in Seattle before I went back, this time willing to stay as long as needed. And no, I wasn’t just going back for this but I was aware of it this time.

I was, with the exception of one minor incident, welcomed back as family. I made my intentions clear from the onset. I wasn’t coming to party, I was coming to pray. Going back was more or less a last ditch effort and much like the first time, I had little expectations.

Turns out my friend was in need of my help when I arrived and the situation worked. During this time I was also instructed how to make the brew. Sorry kids, but this is one recipe I have committed to heart and will take to the grave.

It became clear that my main issue was doing a ceremony with a group of people and we decided it was best if I did my own. So one night  I built a fire at sunset and watched the sunset in the jungle. I didn’t resist it this time. I humbled myself and surrendered to the unknown.

It was not as intense as other things I’ve tried but far more prolific. Most people end up having to endure what is known as “The Purge” which is exactly what you imagine only less fun when you have to live through it. But you know going into the situation that it is going to be part of the process so you are glad to get it over with.

Though I won’t go into what I saw or experienced I can say that my heart was opened, my fears confronted and my eyes started to focus again. My priorities shifted in a big way

But it doesn’t end there.

The whole reason for doing this is so that you are able to take what you learned from all of this and make changes in your actions, your words and the world. You don’t trip on Sunday and then go back to being an asshole on Monday. You apply what you learn. I saw I was a selfish prick and as a result, I try to be more giving and patient. Did I have a life-altering revelation? Not really, I faced some truths in my life that I had been running from and felt like I was being given a chance to do the work and make things right. That night was the gateway to the change.

Do I recommend this as a course of action for all your woes? No, not at all. It’s a tool, just like Marijuana, meditation, prayer, service work, yoga, etc. But it is a very powerful tool that should be treated with respect.

My advice is this. There is no need to search, it will find its way to you if it’s on your path.

If you dig what I do, please help support us via Patreon, buy a book or check out some of the merch.