One of the recurring themes of my life is my ability to find chaos no matter where the hell I end up, even when I try my best to stay off the radar. Now please don’t get me wrong, I love the idea of things working out as planned but they never do, no matter how simple the idea is. It goes back to the long-running joke that you can blindfold me and drop me off in a brand new city and I will find the most fucked up woman and restaurant and fall madly in love with both of them. Yes, it’s dysfunctional as hell but it’s the way things keep working out. Be grateful it’s not you living this.

The point is that even when I try to stay away from the industry and women things still get strange. I had no plan when I landed, I knew I needed rest and a heavy dose of the medicine and I wasn’t going to make any choices other than that. I also knew I was far too burnt out after the last few months and a string of bad gigs in the city, so when my friend said he knew of a guy up the mountain who owned a farm and was looking for help, I was interested.

My logic was this. I’d still get to work with food but not have to deal with the bullshit of the industry. I’d get to be in the fresh air and eat well. I’d be able to heal my mind and body and do Yoga and shit like that. It sounded great on paper.The deal was that I would work 35 hours a week in exchange for room and board and I wasn’t allowed to smoke on the property and booze was forbidden but smoking weed was fine. Not a bad gig really. 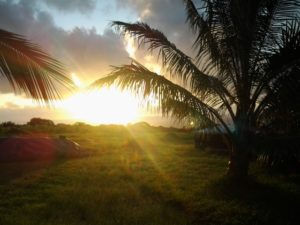 I went to do a days work with my friend who knew the lay of the land and the place was total paradise. The views from just about anywhere on the place where epic and the farmer, despite turning out to be batshit nuts on every other level was a master farmer so the place was extremely well run. I was sold and the guy said I could come up at the end of the week and he would have a cabin ready.

I made the most of my last few days at my friends’ place and tried to get my head ready for a massive change in lifestyle. I was going to really make a go at quitting smoking and stocked up on what I thought would be the last of my smokes.

I was going all in including becoming a vegetarian. As I said, I was seriously burnt out and needed to make some major changes. The honeymoon phase lasted for all of about 4 hours at best and I quickly saw that I was a fish out of water. I had gone from being a hot shit Chef in Cap Hill in Seattle to milking a cow. And I was being ordered around by a 19-year-old.

Now please understand that I am humble enough in real life to know my place and to follow orders when I need to. When I work under another Chef I show em that respect that I want and do things their way since its there Kitchen. And if the Chef is a moron I take his job or quit. This boy was, as we say in the south, touched.

I’m sorry but I’m not going to listen to someone talk about growing and selling weed when I’ve been smoking it literally longer than they have been alive. Not to mention driving 9 miles with the E brake on or any of the other various fuck ups this kid pulled on a near-daily basis.

The one kid there that had half a clue was hiding due to various reasons we won’t go into. He was a fish out of water like me but wasn’t a total idiot. The other chick was an uppity Christian chick that figured out that the farm was more or less a front for what could be called a cult got out of there about a week after I got there.

The living conditions were not bad overall, I had a private cabin on the property and we had a communal shower and Kitchen. The only really scary part was the outhouse. It was half open so looking out from the Kitchen you could see if someone was taking a shit. It had a seat but since the pit was filled with roaches and maggots (for compost of course) I never sat on it. I kind of just hovered and hurried and prayed like hell I could hold my breath the entire time.

I damn sure don’t take taking a shit indoors in private for granted anymore. I’m an asshole but I’m not an asshole. Case in point. On the Christian chicks last day, she commented that she hadn’t gotten a chance to milk the cow while she was there. We only milked once a day so she was out of luck but we told her she could milk the bull hoping she would get the joke. She didn’t. She went with us to put the bull in the pin and was happy as hell she was gonna milk the bull and we made it as obvious as we could that this was a joke. She wasn’t stupid, she was just that ditsy. She would have gone through with it had I not put a stop to it myself when she got ready to go into the pasture.

She wasn’t happy when I explained to her what was going on. I could see her processing it as I did but I was also the one stopping her while the other two watched and waited. I think they might have let her try.

As far as the place being a cult. Well, nothing in life is ever simple. People find their path in some very strange ways. I found mine in the Kitchen and this so who am I to judge. Out of respect, I won’t go into the type of shit going on there, or even where the place was. But let me tell you when shit gets so weird I have to step back, well I’ll let you draw your own conclusions. No, it wasn’t a sex cult.

I made the best out of it, at first. I got on my knees and spent hours weeding and digging holes. They let me play with a Machete to cut sugar cane and from a Culinary perspective, it was an amazing experience. I gained a new respect for everything I work with. You don’t use butter the same way after you have to get up every day to milk the cows.

On that subject. Cows are big, scary and I hope I never have to deal with them ever again. Milking a cow is not an easy process. You have to get that bitch in a pin, they smell worse than you think. They kick like a motherfucker and have no issue with pissing and shitting on you. After two weeks I realized if I got up early and got to work in the field I would avoid it and that became my routine.

I went damn near full vegan and cut down to 5 smokes a day, 3 with my coffee, one after lunch and one before bed. I’m typically a two pack a day guy but let’s face it, you can take the Chef out of the Kitchen but he’s still gonna be an asshole. I tried my best to stay as off the radar as much as possible but when questioned I was honest in my opinion and when pushed I stepped aside and let the assholes fall to the ground.

I can think of a half dozen time when I would have been justified in bitch slapping the idiot but I didn’t. I kept my cool for the most part and just let him continue to make an ass of himself which he did daily. Then one day he pushed too much and too hard and I “snapped”.

He had sent several annoying text messages that morning and I wasn’t feeling chipper so when I walked by and he made yet another comment I flipped him off putting my finger about 3 inches from his face and told him to fuck off. I swear that’s all I did to this kid and he hid from me for two days. The farmer was on his own trip and didn’t come down till two days later when he asked me to leave.

Like the at the Buddhist temple, he was very polite and respectful and it’s not as if I didn’t see it coming. I made a few calls and packed my bags. The old man was insistent he was going to drive me to town but he was too fucked up to stand up straight and I told him point blank I was leaving the same way I showed up, high with my head held high.On my way out it occurred to me how easy it would be to rip off the idiot of his entire stash and let the cows out of the pasture.

Given various other situations that where taking place on the farm at the time, having 3 large pissed off animals roaming free would have been amusing as hell. There are times in my life when the only reason I say “no” to temptation is the fact that I know I could say “yes” but chose to be a better man. But I sure as hell entertained the idea and thought about the minor consequences I would have to face since the cops getting called wasn’t going to happen, trust me.

When I got back to my buddies place I thought he was going to be pissed at me for leaving on not so great terms. I left respectfully and given the situation I handled it better than I have similar scenarios. My friend wasn’t pissed, he was amazed I had lasted 3 weeks. He knew both the farmer and I fairly well and thought it would be good for the two of us to butt heads for a bit but he really didn’t think I would stay for more than a week. The fact that I last as long as I did earn a lot of respect from him and showed him I had come back to make some major changes.

Looking back months later now that the dust has settled, I wish that I has been a bit more open to the changes taking place there. No doubt that the time I spent was not time wasted but I think that if I had been a slight bit more open-minded that I could have learned a lot more.