ED note: Yes, I’m in the middle of one right now but I’ve also been through more than just this one. I’ve also been fired from more Kitchens than most of you have worked in, not to mention the ones I quit. While the subject is rather fresh, this is by no means directed at my ex. That being said…..

So why am I starting off with the breakup instead of the job hunt you might ask? Well, it’s simple, if you handle the break up like a pro you’ll be able to land a better job a lot faster. If you’re in a job, it’s better to know this now than while you’re dealing with it first hand since things can get messy if you’re not prepared.

Loss is loss and loss is fucking painful. Even if it was a bad situation, change is difficult even if it’s for the best and looking for a new job sucks. If you were the one who dropped the ax, it’s still not a walk in the park.

When I was in my early 20’s I was living in Berkeley and was more or less a boytoy for a woman 15 years older than I was. With who we were for that period of time, it worked out. We were both the very thing we each needed but as we grew as people, we grew apart. Some people grow together and become stronger but for various reasons I’m not going to cover, this seems to become more and more rare.

The point is people change and so do businesses. When you started, it might have been a small place but over time they added locations and grew into something that’s not the right fit for you anymore. There’s nothing wrong with this.

Trust me on this one. When it’s done it’s done, you know it, they know it, it’s past the point of resolution and rehashing the past is pointless. Same goes when you have to talk about how the situation ended since, let’s face it, it will come up at some point. Keep it vague and lean towards the positive. Even if the other gig was shit, focus on what you learned from the situation and what you currently have going on.

It’s better than settling for a bad situation.

I’ve been in some bad situations with jobs and relationships where I had put myself in the position of more or less being stuck in less than ideal circumstances. Living in Yellowstone was awesome, for the most part, but living with my coworkers in dorms was not easy for me since I like my space. Same thing for when I was living with the woman who’s coffee shop I was running in Hawaii. Things get to the point that it sucks to stay but just as hard to leave.

In this case, I highly advise you to find a way out. The longer you stay in a bad job or a bad relationship, the worse it gets for everyone involved. It takes a leap of faith and you need to be resourceful but it’s better than living in misery and hating life every day.

Shut up, just trust me, shut up. As much as you might want to put people in their place and whatever, it never works the way you plan and you end up looking like an ass. If you’re ending a bad situation, most likely you have to tie up loose ends, get your last check, your coffee maker, whatever. This is never fun.

First, you need to ask yourself if it’s even worth the drama? Have em mail your last check, let your former partner keep whatever. If you have to deal with them face to face, be cool. Don’t engage and start playing the blame game. Stay focused on the exchange, smile and say goodbye and walk out before you say something stupid….like I tend to do which is why I’m telling you not to.

You’re going to be fucked up for a while. 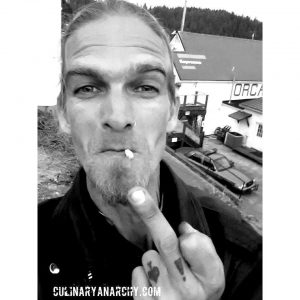 If you’ve worked for a place for a while, even if it’s a bad situation and you’re not “happy”, you still get attached to it somehow. As I said above, even in the best of situations, change is a bitch even if it’s for the better. You need to face the fact that you’re going to be at least a slight bit off balance for a minute.

If you can afford to, take a few days off between jobs and have some fun. You need to make sure that you’re recharged and are bringing your A game to whatever the world throws at you. The last thing you want to do is bring in your baggage from the last situation. If you do this, you’ve ruined the new before you’ve even started.

Look back, learn and let it go

Every interaction we have changes us slightly and you can always learn something from the situation or yourself and your perceptions. I hate to say it but I’ve learned as much from the idiots I’ve worked with as I have from guys like Allen Carlson.

At the same time, it’s pointless to hold on to these things after their time has passed. I can drive you around Seattle pointing out all the various Kitchens I’ve worked in and been 86’ed from over the years. Some are still in business and others have been bought and sold several times over and I doubt that I’m much more than a rumor. Months and years have passed and you learn to not hold on to too much.

It happens when you least expect it.

I didn’t think I would be at my current gig for more than a month, that it was a stepping stone. The place had a lot of things I didn’t like and they don’t pay worth a shit.  Yet the chemistry is there and I’m coming up on six months which, for me is a long time. It’s basic food but I really just like working there and it’s turned out to be the best gigs I’ve had in awhile.

Part of the reason it worked is that I was bluntly honest about who I was and how I worked. I really wasn’t trying to sell myself, in fact, looking back I may have somehow been trying to sabotage the interview. The point is that we came to an understanding right off the bat so there were no surprises when I got weird. Again, this was the last place I expected to be at long term. While there are still aspects that drive me nuts and I know I could find a better paying gig closer to home, it wouldn’t be as much fun and I wouldn’t be as happy.

This is why you need to do the above and the reason I’m starting this series at the end since I highly doubt any of you are in your first job or relationship. See, there is a method to my madness.

Error: Access Token is not valid or has expired. Feed will not update.
This error message is only visible to WordPress admins