Let’s face it, some stereotypes are funny as hell and having worked in the industry for nearly 25 years, I’ve seen some things you can’t unsee. Please understand I’m not talking trash about any of these guys since I’ve worked with them all over the years and at the end of the day, we’re family in this game. Those of you who get butthurt over the following need to lighten up. For the rest of you, here’s your crew.

Do not fuck with this guy. Chances are he’s tiny, focused and only a month or two sober hanging by a thread. This crazy little shit can handle 10 tickets verbal with mods in a room full of drunks at 4 am and still pull 10 minute ticket times. These guys scare the hell out of me.

Fuck this guy, he’s great for advertising but slower than hell on the line. Plus their ideas might look pretty but often have no substance since it’s all for show.

This is the guy that makes me look like a greenhorn. He’s seen it all and somehow lived to pass his wisdom on to anyone who is smart enough to listen. He’s got a bad back and bad knees and tends to be slow as hell yet he’s been around for so long that he’s one the most efficient and reliable members of the crew.

This kid has never set foot in a real Kitchen and it’s comical how little they know and how gullible they are. I was 12 when I got my start and I’m grateful for the hazing I endured, hell, I’m still friends with a few of the cooks I worked with in the 90’s. You have two choices with them, you can scare em and scar em and make sure they never come back or you can inspire them, then scar them for life. Yes, they are often slow but they make up for it with their eagerness to learn and lack of bad habits.

You haven’t done a full year in school yet but you want to stand up to a guy who’s been cooking longer than you’ve been alive? This kid jerks off to cooking shows and practices his insults in the mirror. Guess who’s cleaning the grease trap?

This guy is a wreck and often an addict yet is able to pull off some of the most amazing shit you’ve ever seen and it makes it worth bailing him out of jail. Yes, he has to be high and drunk but have you tasted his pasta?

This dude cooks to have something for taxes but his real money comes from selling drugs to the staff.If he doesn’t have it on hand, he can find it. Often he’s one of best on the crew since he’s too fucked up to stress out about anything and knows he’s going to make money. 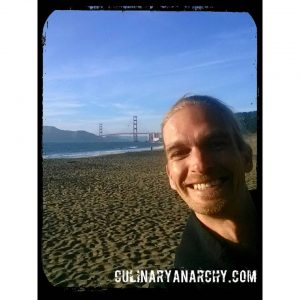 His dad plays golf with the owner and that’s why you can’t fire him despite being “Touched” as we say in the south. Motherfucker can’t make mashed potatoes and should never be allowed to handle knives or be around an open flame. He’s also great for cleaning the grease trap.

He has a bad attitude and has been blacklisted and 86’d from most places yet he’s always available when shit hits the fan. While you know he won’t last long, he is a quick fix in dire straits. At some point though, you know he’ll lose his mind yet again and quit.

This guy, or often several guys come from parts unknows and are often the backbone of any Kitchen. They worker hard and never bitch and tend to be loyal as hell to those who treat them with respect. While there is a slight language barrier at times, food is food and food is love so you figure it out.

He’s the guy who doesn’t want to be the Chef yet he’s the one everyone else goes to for directions and guidance. Chances are he’s what smells like weed but you’ll never see him stress. He will sleep with most of the waitstaff.