Most Chefs have moments of clarity while cooking where the whole world makes sense with one bite and I can still remember the very first time I ever tried Goat Cheese. It was one of those moments in life that was so random and out of the blue that it helped really open my mind to the power of food and how much of an impact it could have.

I was cooking part-time at * The Fox while working full-time as a Sous Chef at another joint. I had history there but that’s a whole other subject (my mom and dad met there) and was enjoying the fact that it was one of the easiest gigs I’ve ever had. One afternoon one of my regulars stuck his head in the door and said he had a something for me and wanted to know if I was busy. I told him to come in as he pulled out a small brown bag with another plastic bag with a white substance inside.

Since I was working at a strip club so guess what I thought it was? No, it wasn’t good blow (not that I’m into that shit) but something soooo much better. It was real unpasteurized goat cheese from his families farm in Greece. His grandmother had milked the goats and made it. I didn’t ask and still don’t want to know how he got it through customs.

At the time I had just gotten back into the game and was taking it seriously but was still cooking from my head and not my heart. I hadn’t developed a true love of food but I was also smart enough that anything illegal was most likely good. 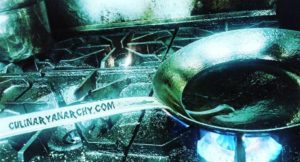 I didn’t know what I was getting into but it was a slow night and I was bored as hell. The guy asked me if he could use a saute pan and some oil cause I HAD to try it. I was skeptical but stoned and bored since the Kitchen was not high volume. It was just a little oil, some salt and pepper and this soft white sticky cheese. He seared the outside and hit it with some more S&P, but just a dab. This guy was a blue-collar shipyard worker, the type you would think would be into wings and beer but the SOB blew my mind and he knew way more about food then you would think. He started telling me about the different kinds of olives they grew on the farm and how they pressed the oil on a stone that was a few hundred years old. I stood with my jaw dropped as the smells filled the Kitchen.

It was clear that he knew how to handle a pan and blade and took his time while still being fast as hell. I was impressed just watching him move and then I tried it.

Still, to this day it stands out in my mind as one of the best things I’ve ever put in my mouth, and I’ve eaten things most of you haven’t ever heard of. It popped in my mouth and sent my senses over the edge. Maybe it was due to the fact that the situation was so random and unexpected, I don’t know.

But I’ve eaten goat cheese since then. I’ve eaten really good goat cheese, but I’ve never had it have the same impact, the texture, the same shock value. Its one of the truly great things about food. It brings people together in a way that nothing else really does. It hits the senses and draws people’s attention. Good food can make the rest of the world fade if you have an open mind. Don’t judge, don’t be afraid to try new things. And if some strange guy walks in with a brown paper bag and a smile, don’t be a dick, he might know a lot more than you do.