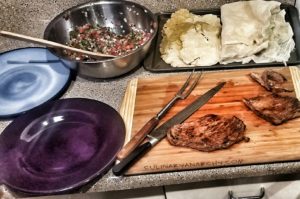 I love Tacos. I don’t need to explain this, tacos are tacos. Then I realized that come Taco Tuesday, I get a bunch of fresh veg for the pico and I marinate some steak but I buy Tortillas.

Wait wha? Why? It’s corn and water, they don’t take long to make are way better than most of the store-bought ones. Yes, having a press makes it a lot easier but I don’t have one and neither do most of you. But you do have a rolling pin or a bottle of rum and this works just fine.

Keep in mind that this recipe is for Corn Tortillas, not flour though I will end up publishing a recipe for those as well. To make Corn Tortilla, you need to find to find stuff called Masa Harina which is ground corn and lime (the mineral, not the fruit) but relax, it’s harmless. Corn is soaked in an Alkaline solution for a while that makes it easier to grind and also improves nutrition and taste. People have been doing this for thousands of years